You probably noticed the scroll steps that appear in your tests.
Each time a scroll is made using the mouse wheel, we record a step and play it when the test is running.

In most cases it just works, in some cases, you may want to change it. So let's try to figure out how it works.

Scroll to an element is the most popular scroll, this will be recorded when you scroll and interact with an element on your application. 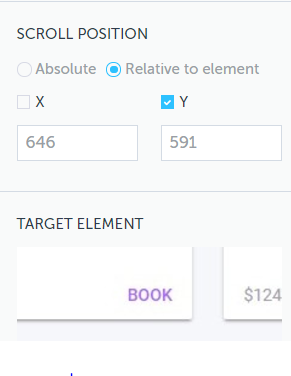 In this example, we recorded a scroll to a "Book" button.

Scroll on page / Scroll on element

"Scroll on page" step and "Scroll on element" step are absolute scrolls, they will be recorded when a scroll is made on the page but with no interaction with an element after scrolling. 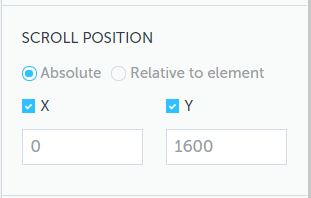 There are some changes you can perform on scroll steps.

Change from absolute to relative

Change from relative to absolute

Some applications implement advanced interactions using the mouse wheel (for example custom scroll components which do not use the native scroll bar or map applications).
In these cases, the recorded step will be a mouse wheel step, instead of a scroll step.

Updated about a year ago