You can add a status to your tests to help manage which test needs to be worked on. The statuses are displayed as one of the columns in the Test Library list and in the Test Editor.

By default all statuses are labeled as "Draft". After the feature is enabled, Testim automatically identifies tests that were run in the last 30 days and labels them as "Active". All other statuses are applied manually, as described below.

By managing the tests' statuses you can enjoy the following benefits:

This is a PRO feature

In order to use this feature, you'll need to upgrade your CLI version to be at least v3.135.0, read here about CLI installation

Each test can have one of the following statuses:

*The best practice is to add a test to the CI/Scheduler only after the test is ready, and not in Draft status

To filter test by status: 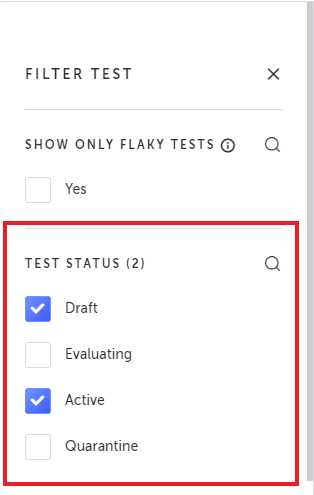 Modifying the status of a test

Statuses can be modified manually. All changes to the test status will appear In the revision history.

To change the test status through the Test Library:

*Note: it is possible to bulk edit tests status, by selecting all the tests you would like to edit, and then clicking on change status from the top menu.

As part of the test status, we also added an option to view your flaky tests and decide how to manage their status. To read more about the flaky tests, see here.

To change the test status through the Testim's Editor:

When changing the status the test is saved as a revision. If you want to merge it back to Master, you will have to resolve it as a 3 way merge conflict, to read more see here

After running the tests, the statuses will be reflected in the following way:

On suite runs, the statuses will be reflected in the following way:

Updated over 1 year ago